Find your cleaning solution below

Search the Queen's cleaning tip solution library by typing in a keyword phrase below: 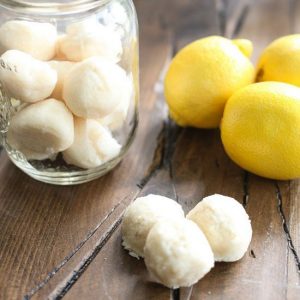 Mix the baking soda, dish washing liquid and sea salt together in a mixing bowl.  Add the essential oils as desired.  Then slowly add water until the mixture sticks together without being too wet.  The more essential oils you use, the less water you will need.  If you add too much water by mistake, just add more baking soda until you get the desired texture.  Using your hands, form the mixture into balls {approximately 1 – 1.5 inch in size} and place on a sheet of wax paper on a cookie sheet.  Allow to dry overnight until firm.  This recipe makes approximately 20 balls {depending on size}. Place in an labeled airtight container. They will store indefinitely.

REMOVING THE STINK FROM THE GARBAGE DISPOSAL

Your garbage disposal has a black rubber splash guard inside the drain. It keeps the grinding food from splashing back and also helps to keep things from getting inside the disposal. That is where your smell is probably coming from. Here’s what to do.

Normally the gasket is removable by reaching under it and pulling up. PLEASE WEAR DISPOSABLE GLOVES. Trust me, you don’t want your bare hands touching what you are going to find under the gasket! That’s where all the water, food and gross stuff collects. It sits there and boy can it stink. Pull out the splash guard and turn it over…….be prepared for what you will see. Now spray it with white vinegar and let it sit a few minutes to loosen everything, then use an old toothbrush and some dish soap to scrub it clean. You might want to toss the toothbrush when done, so pick some up at the $$$ Store

Rinse the gasket and reinstall by pushing it back in until it fits snuggly.

If the gasket is not removable lift up the flaps and use a toothbrush to clean them the same way.

When life gives you lemons, cut them into small sections and then toss them down the disposal when it’s grinding. You can also do the same thing with a fresh lime or a sliced orange; the citrus scent gets rid of most strong stenches. This is one of the least expensive ways to neutralize rancid smells.

Ice cubes can also be used to remove any strong odors that are coming from the garbage disposal. Unlike citrus, ice won’t leave a separate pleasant smell behind, but as an added bonus, the ice can actually sharpen the grinding blades.

Make your smell busting ice cubes out of white vinegar for extra power.

Foods That Should Never Go In the Garbage Disposal

Fat and grease should never be put down the garbage disposal. Actually it shouldn’t be poured down any drainpipe. When melted fat or grease is poured down a drain, it eventually cools. It then hardens inside the drain.

It’s best to pour the liquid into old jar or can and let it cool before tossing it in the trash.

I can’t imagine anyone putting large bones in the garbage disposal, but apparently it happens. The same is true for large seeds, like a peach pit. They’re extremely dense and take too long to grind up.

Onion skins can easily stick to the sides of the disposal and wrap around the shredder ring causing major problems down the road.

Coffee grounds may not necessarily harm the disposal itself, but they can accumulate in drains and can cause clogs. Remember, coffee grounds work great in compost and your garden.

Asparagus, celery, corn husks and the like have long stringy fibers that make up the veggie. When the blade works to chop, it’s likely that the strings won’t be cut and they’ll actually wrap around the disposal.

Anything in Large Quantity

I was peeling potatoes for Thanksgiving one year and I pushed the scraps into the sink and garbage disposal. I turned on the garbage disposal and it worked for a minute or so and then stopped. Both sides of the sinks were stopped up and it was a big mess to get everything in working order again. Don’t insert large quantities of food into a garbage disposal!